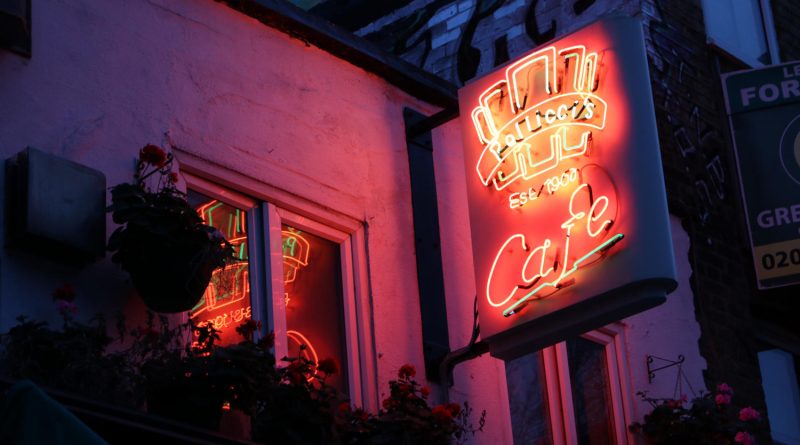 We talk to Bethnal Green’s most iconic sibling duo since the Kray twins, Anna and Nev – the third generation of the family run E Pellicci cafe.

An interview with Pelicci’s sibling managers Anna and Nev must necessarily involve the cast of loyal patrons that frequent this East End-Italian institution, if only by default of the cafe’s diminutive size.

Possibly the most popular and iconic sibling duo since the Kray twins, Anna and Nev are the third generation of E Pellicci’s, working tirelessly alongside their mother Maria, who is entering her sixth decade as matriarch extraordinaire.

Today, not only are the Family entertaining their die-hard regulars, as well as clientele from places as far flung as Germany, but also a camera crew documenting the cafe, which Anna has nonchalantly forgotten about (‘the problem is, they’re Italian, so they will know if I’m being rude about them!’, she cackles at the camera).

The duo dart between the front of house and kitchen, lugging enormous vats of olive oil, all the while ripping into the guests in the most charming of ways. As I get my camera out Anna yells, ‘Don’t get a shot of the grumpy c*nt in the corner, get our more glamorous guests! Like Diana – she’s one of our more posh visitors, like you!’.

Bethnal Green has become synonymous with E Pellicci’s . It draws crowds from all over the globe but paradoxically managed to maintain the intimacy of your local greasy spoon cafe. It doesn’t take too long to understand that its popularity is owed to a healthy combination of good food and the double maitre-d’s finesse in making absolutely everyone feel welcome.

Nev attributes this art to their Italian heritage. They treat their clients as if they were guests in their own home – ‘I always have something in the fridge at my place just in case someone comes round. It gives me huge pleasure.

We grew up with this place being an extension of our living room, so home and work life are a total blur’. As if on cue, Nev is up, refilling a child’s glass of milk just as liberally as his dad’s cold beer.

The feeling of generosity ripples through the room: from the way in which each guest is attentively looked after, to the impossibly large portions of food in front of them. The chicken escalope sandwich is enormous. Men with impressively ample sized paunches sit back in their chairs, rolling their eyes in defeat.

It’s striking how many people flock to Pellicci’s to bathe in a community spirit and sense of care that is otherwise receding from our high-streets. Is it a big burden to shoulder? Sincerely, Anna explains,

‘Although it’s bloody hard work, we are lucky to be here. There’s a real sense of how much our family has put into this place, so it’s our responsibility to maintain that. I get emotional when I look at my mother, Maria (the second generation). She’s 81 and she has literally been prepping food back there for the last 60 years. She’s the most selfless and hard-working person I know.

But equally – there are tens of thousands of places you could go to in London, so we’re so grateful that anyone chooses to come here. Even if it’s just to spend 80p on a cup of tea, thank you.’

Her genuine love for this work is enviable: ‘I have never ever had the Sunday blues about the coming week working here’. A customer reaches her hand towards Anna’s to communicate that the feeling is mutual: ‘people come here to be happy’, she winks.

But it’s certainly no walk in the park. Nev and Anna admit to fighting with each other and with their parents when they were younger.

‘Whatever we did, it would never be good enough. Chop faster, scrub harder. They used to really make us work. But as I’ve gotten older and have my own kids, I realise where they are coming from. Anyway, I’m too tired to argue now! The food prep alone will take it out of you.’

Anna expands: ‘Take the chips. The night before we peel and soak them to get the starch out. We then cut out all the little black eyes, shape them, cook them once, let them cool, then leave them in the fridge, and then as people order them, we cook them again. It takes hours and hours.’

Yet it seems that for all the hard work they put in, the family gets back in respect and appreciation. It’s a true lesson in reciprocity economics.

Last Sunday was the anniversary of the death of their father. Anna recalls the hundreds of people that turned up to pay their respect at his funeral. ‘We still can’t understand it but suddenly all these police cars emerged and escorted the hearse all the way along the A12 to the Catholic graveyard in Leytonstone, where he was buried.

Maybe they thought it was Prince Phillip before realising, oh shit, it’s that silly fella from the cafe!’

Although, it’s  hard to believe. This cafe was once a favourite of the Krays. All of a sudden I’m sandwiched between two peroxide 80-year-old women – Barbara and Maureen. Maureen reminisces when Reggie Kray proposed to her all of three times, whilst proudly tapping her chest with a long pink sparkly nail. There are many more grisly tales of the brothers, whose fearsome legacy is still palpable.

If one thing can crack the smiles of Anna and Nev, it’s when people complain about their prices knowing that the same customers are spending £8 up the road in Shoreditch on a burger and chips from the freezer. ‘People don’t realise, we make everything fresh and our ingredients are the best quality. Take our meat, it’s delivered from McKanna Butchers on Grays Inn Road every morning. It’s all locally sourced. Or our coffee – it impresses the snobbiest of Italians!’

They respect good, honest food, and loyalty. Nev smiles as he tells me about his friend’s restaurant on Cambridge Road, Italina. ‘My little girls love their spaghetti vongole, or ‘bongole’ as they say! Except, they have it without the vongole (clams), just the sauce…They do the best pizza fritta. It’s a Neapolitan thing where you fry the pizza before adding the toppings and folding it over – beautiful’.

Otherwise, when not at the cafe he can be found in Laxerio on Columbia Road, the Pride of Spitalfields, the Golden Heart (‘cos I love Sandra’) and the Palm Tree – ‘they are proper in there’.

It’s hard not to leave without a feeling of heartfelt hopefulness. It might be the chocolate roly-poly pudding in a lake of custard that I’ve just devoured, which reminds me of the food my mother made when I was unwell. But it’s more likely to be Nev and Anna’s fierceless optimism and infectious cheer.

The cafe has withstood a lot of changes in the area, but Nev is far from concerned. ‘When I was younger we would have to go to the West End to go out – now it’s all here! If people move to the area and want to embrace it, brilliant, I don’t care who they are. Most people want to make this area the best it can be. I love the fact I can go out with the kids and enjoy different kinds of shops. We’ve just got to make sure we maintain the East End soul too’.

It’s impossible not to acknowledge the somber backdrop to this conversation, with the news coverage of refugees dying in the Channel. ‘It’s absolutely tragic. You can’t imagine what it takes to leave home with your baby in your arms and what little you have in your bank account. People come because they have nothing, not for a free ride like people say – just like my grandma.’

Undoubtedly, their grandparents would be proud of what Pellicci’s has become today. Their portraits sit proudly either side of the kitchen hatch, reminding you of the love and history upon which this institution is built.

Anna makes a faux prayer to the sky, ‘please God, if we can leave the same legacy for our children!’

There’s certainly no need for miraculous intervention here. The joy of this cafe extends far beyond the parameters of the Pellicci family, and Bethnal Green wouldn’t be the same without it.

If you enjoyed reading about E Pellicci’s, you may also be interested in our article on Repton Boxing Club.