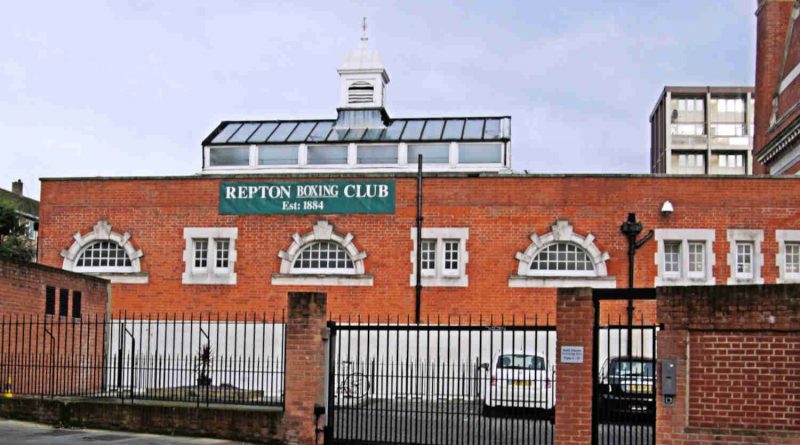 Boxing and Bethnal Green have long-gone hand-in-hand. The area has produced both renowned boxers and iconic venues. None are more iconic than Repton Boxing Club. The boxing club has made a name for itself in the UK and far-beyond, but it remains rooted in the Bethnal Green community, having been a fixture of the area for well over a century.

The move to Cheshire Street

Repton Boxing Club started life in 1884 as a youth club founded by Repton School in Derbyshire. The public school founded the club to help underprivileged youth in Bethnal Green and wider East London, which at the time was suffering from extreme deprivation.

The physical home of Repton Boxing Club hints at its rich history. Walking down Cheshire Street you would struggle to miss the rather beautiful former Victorian Bathhouse that houses the boxing club. The green banner that bears the club’s name and its motto ‘Non Viscara…Non Gloria’, ‘No Guts… No Glory’, indicates the presence of the UK’s oldest boxing club.

Repton Boxing Club and the Krays

Repton Boxing Club has produced many outstanding boxers; however, it also was the club of notorious gangster twins Ronald and Reginald Kray. The Kray Twins were reportedly very good boxers in their youth, they appeared on a double bill at the Albert Hall together in 1951. The pair honed their skills at Repton Boxing Club, boxing at the club before it moved to its current Cheshire Street home.

The gangster pair even made donations to the club and spoke to local newspapers to raise the publicity of the Repton. More recently the club has fundraised by auctioning off Kray memorabilia in the Blind Beggar pub which is synonymous with the pair.

Repton Boxing Club is proudly unpretentious and has stayed away from offering what its website calls the “trendy” boxercise classes, which have become popular in recent years, instead choosing to stay true to its East End roots in Bethnal Green and provide a no-nonsense approach to the sport.

Although Repton Boxing Club had a change of home in 1971, the boxing gym has remained pretty much unchanged since its move half a century ago, complete with peeling paint and faded photos on the wall. This retro look has proved a hit in the art world. On the club’s website, they describe how film directors who have visited the club have begged the chairman not to change the look of it.

Directors who have loved the retro look of Repton Boxing Club include Guy Ritchie who filmed scenes for two of his films including Lock, Stock and Two Smoking Barrels inside the club.

Musicians such as JLS and Plan B have also filmed music videos inside the club. In 1992, Take That filmed the video for their first top-ten single “It Only Takes A Minute” inside the club. The video is available on YouTube, and provides a glimpse into both the look of Repton Boxing Club but also the bad dance moves that Gary Barlow and co were busting out in the nineties.

Repton Boxing Club punches well above its weight when it comes to churning out extraordinary boxers.

The club has produced trailblazing boxers such as Antiguan-born Maurice Hope, who moved to the East End as a child and went on to become the first black British immigrant to win a world title in 1979. Hope was one of those to help inspire the great tradition of Black British boxing.

John H. Stracey is another Repton icon of the 60s and 70s. He is a former welterweight world champion, who honed his skills under the banner of Repton Boxing Club.

More recently, the club has produced Olympians such as Audley Harrison. Harrison became the first ever British boxer to win Gold in the super heavyweight division at the 2000 Sydney Olympic Games.

The club has seen an estimated 40,000 boxers pass through its door since its beginnings in 1884, including many big name fighters; however, for most of the club’s alumni, they were more likely to take away fond memories rather than titles.

For many residents of Bethnal Green, past and present, Repton Boxing Club holds a great many fond memories.

Mike Batchelor grew up in the area and remembers attending the social club from 1957 to 1960.“It was mainly a boxing club but with other activities such as table tennis, football and a few craft workshops kids came from all the council estates within a couple of miles,” he says.

Mike has fond memories of the social club. “Everybody loved it when it was 9pm when the dance floor would open, and the mayhem began when all the guys used to go after the girls they fancied (oh happy days!). They always played “Save the last dance for me” by The Drifters at the end.”

Michael Finch was one man who still had fond memories of boxing at the club as a boy. Michael grew up in Pollard’s Row and lived in Bethnal Green all his life, until his death in December 2020. He trained at the boxing club as a boy and the photo below is of him and another boy sparring in 1963.

Repton Boxing Club is interwoven throughout Bethnal Green’s recent history; it has been the home for some of the area’s greatest athletes, as well as some of its most notorious gangsters. The club has only gone from strength to strength in producing great boxers and establishing a name for itself. With the club in fighting-fit shape, we can expect to see Repton Boxing Club remaining a fixture of Bethnal Green for at least another century.

If you enjoyed reading this you may also enjoy reading about the history of Bethnal Green Library.