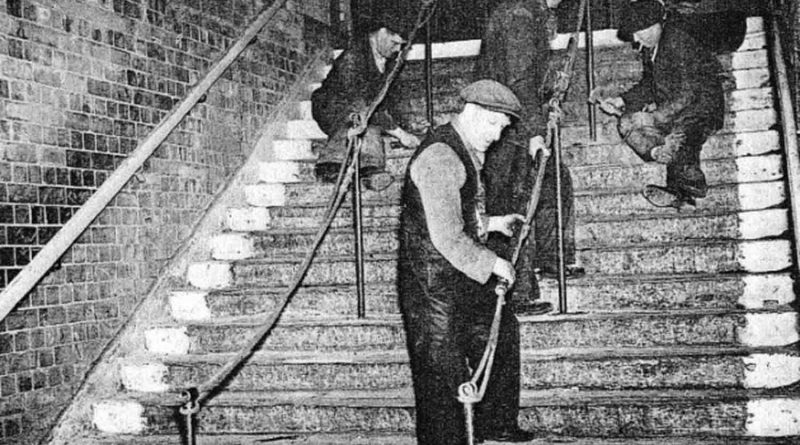 The 3rd of March marks the anniversary of the Bethnal Green tube disaster. One of the worst civilian disasters of WW2. The tube disaster still remains in many locals’ memories and recollective consciousness, but it wasn’t caused by enemy action.

Cause of Bethnal Green Tube Disaster

Bethnal Green tube station had, at the time, one narrow entrance. The tube station had not been completed by the time the war came around and so tracks hadn’t been lain. Out of action, the tube station acted for thousands as a bomb shelter. It accommodated up to 10,000, who would stow away deep into the tunnels.

On 3rd March, 1943, sirens sounded to hed to shelter in advance of an air raid. Locals headed for Bethnal Green tube station from all directions across the area. At 8.27pm three double decker buses arrived at once, packed with people leaving clubs, pubs and cinemas. They all piled off to queue in the pitch dark of the blackout to get through the single, narrow entrance.

At exactly the same time, a new anti-aircraft rocket fired nearby. No-one had ever heard it before. All those waiting to enter the tube were panic stricken, assuming this was a new kind of enemy bomb. As part of the panic, a woman carrying a baby fell at the bottom of the wet, slippery, steps going to the ticket hall. She pulled another man on top of her as she fell and before they could get up, others fell on top of them.

Chaos ensued after this. People coming through the narrow entrance couldn’t see what was happening in the dark at the bottom of the steps. Crowds continued to pour through the doorway and down the steps, all falling on top of each other. Within a minute or two approximately 300 people were trapped, all intermingled with each other, jammed solid between the bottom of the stairs and the ceiling. Nobody could move, pinned down by the weight of those above them, they became asphyxiated and some died because they couldn’t breathe.

The Aftermath of the Bethnal Green disaster

It was 11.40pm before the last of the casualties was brought up and laid on the cold, wet pavement. By then 173 people were dead, 62 of them children. Many of the survivors, and particularly the rescuers, suffered lifelong trauma due to their experience. Many of the children they were pulling out could only be recognised by their clothes or shoes as they had been so badly crushed.

Counselling wasn’t offered to survivors. What’s worse, the government suppressed people from talking about the incident. There was no raid over Bethnal Green that night – which begs the question, why were those new rockets fired that evening?

The Stairway to Heaven Memorial Trust charity has been trying to raise the funds to build a memorial to all those that died in this disaster for 11 years. Finally up at Bethnal Green Tube station, the name taken from an East London Advertiser headline in 2006 when plans for a memorial were first announced, bears the 173 names of victims and pinhole spots of daylight peering through its canopy, one for each of the men, women and children who died on the night of the Tube Disaster.

‘All of those on the charity committee have a connection to the disaster in some way,’ says Sandra Scotting, honorary secretary of the  charity. ‘My grandmother and cousin died in the disaster and my mother and aunt were survivors. It has been a great privilege to receive the stories and memories of so many of the people involved. Most of us lost loved ones in it, or are related to survivors. There are also two survivors on the committee too. For all of us it has been a labour of love over these last 11 years and we are all so delighted to see it completed at long last.’