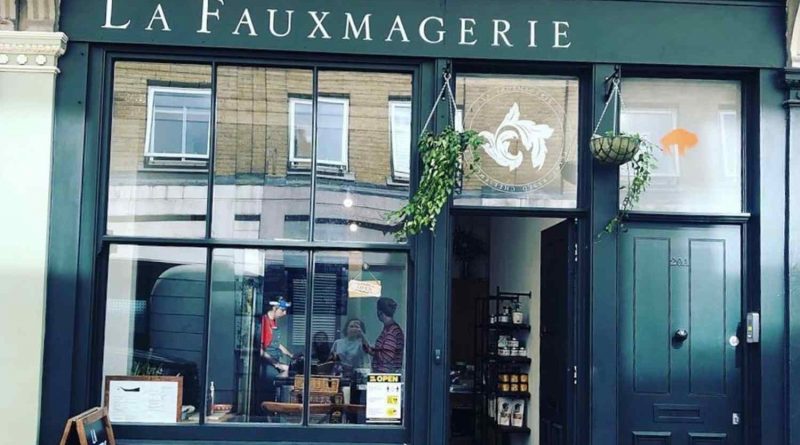 The Brick Lane area is well-known for its culinary offerings of beigels and curries. For those who prefer the plant-based lifestyle, you can forgo paneer in curry or cream cheese in beigels and still get your cheese fix by heading to La Fauxmagerie, just off Brick Lane on Cheshire Street.

La Fauxmagerie is the UK’s first vegan cheese shop. The shop is not just for vegans but welcomes anyone who comes to the shop, regardless of their diet.

The shop opens on weekends only, and at peak times a queue often forms outside it. For vegans missing their cheese fix the shop offers favourites such as camembert, mozzarella and parmesan.

But how on earth do you go about making cheese without dairy, you might wonder. La Fauxmagerie has tracked down a range of plant-based cheeses from various suppliers that use creative alternatives. These include Camembert, which contains edible shea butter, almond-based cheddar and soy milk feta.

For those looking for something to go with their dairy-free cheese, La Fauxmagerie also offers accompaniments, like wine and chutneys. These are, of course, all plant-based.

As well as being plant-based, the vegan cheese shop also works hard to reduce plastic waste. In the Cheshire Street shop the staff use plastic-free, recyclable parchment paper and Kraft paper tape to wrap the cheeses.

La Fauxmagerie is the first vegan cheesemonger in the UK, but it wasn’t always at its current home. The sisters who run the shop, Charlotte and Rachel Stevens, first opened their plant-based cheesemonger in Brixton, South London.

The shop in South London was extremely popular, with customers visiting from all over the city. They moved to their current premises on Cheshire Street (which seems apt for a cheesemonger) for more space as they had outgrown their original premises.

While its queues suggest popularity with customers, La Fauxmagerie is not universally loved. In 2019, when the shop first opened it was criticised by dairy industry group, Dairy UK. The lobbying group said that it was misleading for La Fauxmagerie to label their vegan products as cheese, because they had no dairy in them.

‘It concerns us that consumers are being misled with the use of dairy terms like cheese by the plant-based sector,’ Dairy UK said in a statement at the time. ‘Only products which are real dairy cheeses can use the term ‘cheese’. Plant-based products are simply not dairy in any sense – from a taste or nutrition perspective.’

But the sisters who run the shop disagreed, pointing out that even their name La Faux-magerie, indicates the cheese they sell isn’t “real” dairy cheese.

Charlotte and Rachel now have an online store (which regularly sells out), as well as a warehouse to distribute to fans of the shop around the UK. For those wanting to avoid animal products but who are craving cheese, La Fauxmagerie offers an ethical alternative so that you can tuck into camembert or feta without feeling any guilt.

Omnivores may be more cynical about the plant-based cheese shop. However, if you’re looking to reduce your carbon-footprint, or you’re simply curious about whether a shea butter Camembert can ever live up to the real thing, then not to be cheesy, La Fauxmagerie is the place to brie.