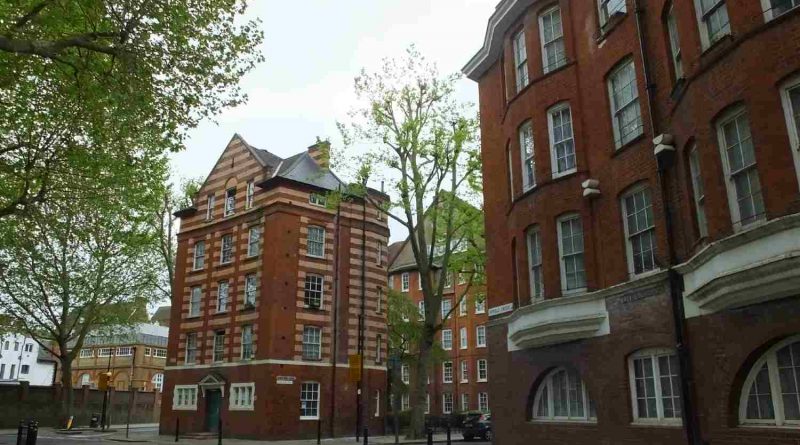 The Boundary Estate has a fascinating history, as well as present. Where the Victorian red-brick mansions now stand, there used to be one of London’s most notorious slums.

With its historic Victorian red-brick facade and proximity to Shoreditch, the flats on the Boundary Estate have all the markings of desirable housing in London. Yet, it is not millionaires who own the majority of these flats, but Tower Hamlets Council, with more than two-thirds of the housing here being owned by the council. In fact, the estate is renowned as the first council estate in London. Delving into the history of the Boundary Estate provides a fascinating look at the East London of the past.

In the Victorian era, there were slums where Boundary Estate now lies. Slums were colloquially termed “rookeries”, which came from comparisons between how the poorest people lived in London and how rooks nested. Rooks nest in large, noisy colonies, often untidily jammed between trees.

The Old Nichol was the name of the rookery that was situated where The Boundary Estate now lies. The conditions were poor, with one in four children dying before they reached their first birthday.

The Old Nichol also became notorious after being the setting of a book named ‘The Child of Jago’, written by author Arthur Morrison in 1896. ‘The Child of Jago’ featured a child condemned to a terrible life by his birthplace of the slum, which was filled with crime and unsavoury characters. The Old Nichol became infamous as the setting of the novel.

Morrison had been encouraged to write the novel by local vicar, Father Osborne Jay. Father Jay was a priest in the local Holy Trinity church (which was destroyed in an air-raid in 1941). Jay encouraged Morrison to visit the Old Nichol (which was actually in the process of being demolished when he visited) and shared with him bleak stories of the area.

The book was a bestseller, but residents said Morrison’s depiction of ‘the Jago’, which had been based upon the Old Nichol, as being a hive of villainy and criminality was vastly exaggerated. Still, the notoriety of the Old Nichol stuck, largely due to the book.

The newly-created London County Council was given permission to create housing in 1890, and the Old Nichol rose to the top of their list. The rookery was demolished and new housing was built in its place.

Owen Fleming was the architect of the new Boundary Estate. He demolished everything except Boundary Street in the west and Mount Street in the east. The estate was designed in a cyclical pattern with the open space of Arnold Circus in the middle. The 1,069 residences that were built were contained in tall, red-brick mansions. There were shops, laundries and workshops for the residents, and the new estate also incorporated the existing Rochelle and Virginia schools.

The Boundary Estate was built to improve living conditions for the poor; however, those poor did not include many of those who had occupied the Old Nichol. Only 11 of the original Old Nichol residents were amongst the 5,100 housed in the Boundary Street Estate.

We would expect council housing to be granted to those most in need, but instead they were given to the “deserving” poor. This was the era of the workhouse, when those in poverty often faced moral judgement from philanthropists. The Boundary Estate was dry, with no pubs and shops banned from selling liquor. Among those who moved in were policemen, nurses and teachers, and “ordinary workers” deemed deserving.

While the building of the Boundary Estate doubtlessly improved the quality of housing in the area, for the vast majority of the Old Nichol residents, it made their lives even more miserable. No provision was made to find new housing for those driven out of the Old Nichol, leading to overcrowding in neighbouring slums in Bethnal Green and Dalston.

In 1900, the Prince of Wales officially opened the new estate, declaring it a marked improvement from the horrors everyone had read about in Arthur Morrison’s novel, ‘Few indeed will forget this site who had read Mr Morrison’s ‘A Child of the Jago’, and all of us are familiar with the labours of that most excellent philanthropist, Mr. Jay, in this neighbourhood.’

London County Council were responsible for building the estate, and to this day, the Boundary Estate is largely council owned. There is a strong sense of community in the area, with many residents taking great pride in what is now a Grade II listed area.

Friends of Arnold Circus is a charitable organisation that looks after the central area of the estate with its bandstand and gardens. There is also the Boundary Community Launderette, a not-for-profit enterprise that acts as a community hub. The former Rochelle school is now an arts hub, just off Arnold Circus.

The Boundary Estate is known as London’s first council estate, but it has a morally questionable origin story, with thousands of people being displaced as a result of its build. These days, however, the Boundary Estate is a strong community, proud of the area they live in.

If you enjoyed this, check out our article on the history of Repton Boxing Club.