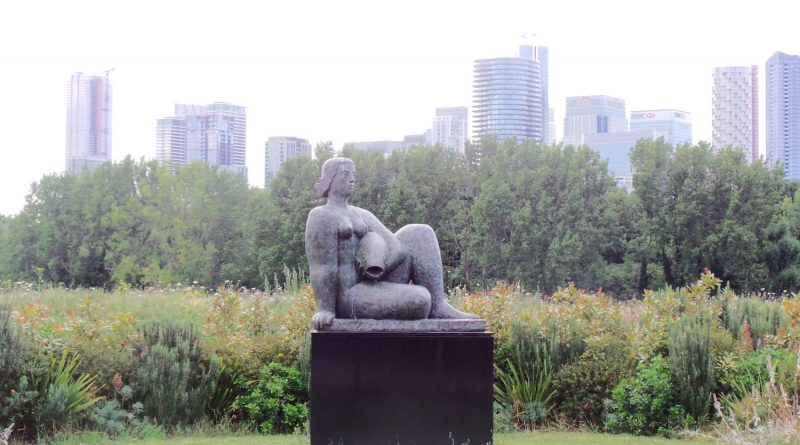 In an era of statue removals, the imminent replacement of Frank Dobson Square’s namesake sculpture is an antithetical commentary on the value of public art.

In 1979, Frank Dobson Square’s statue ‘Woman and Fish’ was decapitated in a sinister and allegedly misogyny fueled act of vandalism. It was restored and returned in 1985 before being totally destroyed once again in 2002.

What was left of the statue was swiftly taken away and binned, leaving behind an eerily empty plinth at the heart of its former home, the Cleveland Estate.

It is now on the list of ‘lost’ pieces of art in London.

That is until Tower Hamlets agreed last month to refurbish Frank Dobson Square – which sits near the junction of Cambridge Heath Road and Cephas Street – as part of the Local Infrastructure Fund, and in doing so, to replace its long lost statue with a new one.

The ‘Bring Back Our Statue’ campaign group has been campaigning for the repatriation of the piece of public art since 2016.

Their success – supported by a petition with 245 signatures – is testament to the hard graft of community campaigning. It also shows the value in funding streams like that of the Local Infrastructure Fund, which uses levies raised when development causes undue pressure on the local area for infrastructural issues suggested by the community.

The removal of statues has been a hot and contentious topic of late, starting with the removal of white supremacist Cecil Rhodes in Cape Town to the toppling down of the slave owner Edward Colston into a river in Bristol, UK, and the West India Docks’ own Robert Milligan.

Social commentator and author Gary Younge vehemently fought the case that all statues should be removed, as they seek to ‘petrify historical discourse, lather it in cement, hoist it high and insist on it as a permanent statement of fact, culture, truth and tradition that can never be questioned, touched, removed or recast.’

But what about in the cases of public art, where statues are more figurative than literal? And what to then do in the empty spaces they leave behind, which equally become a ghostly embalming of times now gone by?

For the likes of the ‘Bring Back Our Statue’ campaign group, the removal of Frank Dobson’s fountain ‘Woman and Fish’ reeked of great loss rather than a progression of values.

Tara Staunton, one of the founders of the campaign, explained that in fact, the reinstating of public art to the working class area means more than what meets the eye.

‘When the council bought the statue in the 60s, it was really forward thinking. Loads of council were doing it at the time. They understood the value of art and how it inspires the local community.’

For instance, Henry Moore – whom Dobson taught – donated the statue ‘Old Flo’ to Stifford Estate, Stephney in 1962, which is now a symbol of the East End. In a similar hand of fate, after surviving vandalism, the demolition of the estate in which it was housed, several removals and custody battles, it is now on display in Canary Wharf.

Tara walks past the square everyday and describes it as a ‘grim thoroughfare’.

Choosing to renovate the statue tells the local residents that it’s a place that matters – somewhere with value and even beauty. Just as we inhabit our local environments, whether we are conscious of it or not, they begin to inhabit us.

In the same ways that access to light and nature has been proven to positively affect mental health, artwork can have an equally expansive and transformative effect on its audience.

‘There are a lot of vulnerable people who hang out in the square. Shouldn’t they have access to artwork too?’, she considers.

There is also a clear synchronicity between the square and its namesake, Frank Dobson.

The square was constructed in the year of his death, 1963, to commemorate his life and work. The ‘Woman and Fish’ was designed and made by him in 1951.

Dobson’s portfolio of modernist sculptors largely consists of abstract female figures which pioneered the landscape of British sculpture. He inspired lots of his contemporaries, like Baraba Hetworth and Henry Moore.

‘Even though the council haven’t confirmed what the sculpture will be, I hope it will be of a female figure because there is still far less representation of women in the public realm.

It’s particularly important considering the vandalism of the statue was a form of misogyny in the first place.

Although this certainly wasn’t representative of most of the locals at the time, it was a dark time’, reflects Tara.

To rub salt in the wound, in 2006 Tower Hamlets decided to commission Antonio Lopez Reche to make a bronze replica of the ‘Woman and Fish’. Cast in a foundry in Limehouse, it was eventually installed in Millway Park on the Isle of Dogs the following year.

Tara and Richard Kirker were introduced by the Council, having both made several separate complaints about the state of the desolate square. Together they formed the campaign, kickstarting the petition and a public consultation.

Tara is very complimentary Councillor Sirajul Islam of the Bethnal Green East ward who successfully pushed for getting the square on the Local Infrastructure Fund’s agenda.

They have even got Dobson’s nephew on board. He now owns his great Uncle’s estate and has been involved in showing the campaigners different examples of his work they might light to replicate in bronze.

In the same Guardian article, Gary Younge said that he disapproved of statues for being ‘erected with eternity in mind – a fixed point on the landscape. Never to be moved, removed, adapted or engaged with beyond popular reverence.’ To put up a statue, afterall, you must own the land where it stands, so there is an extricable link to power.

However, what the ‘Woman and Fish’ proves is that nothing is forever – even if it’s cast in bronze. Artwork mutates, absorbs and refracts back its environment changeably throughout time. They are vulnerable to the weather, vandalism, appreciation, interpretation and total removal in equal parts.

When the statue was first defaced and removed, it stung the community. But now, with power to the work of the campaigners, there is palpable joy and pride amongst the Cleveland Estate residents who are now waiting for its imminent resurrection.