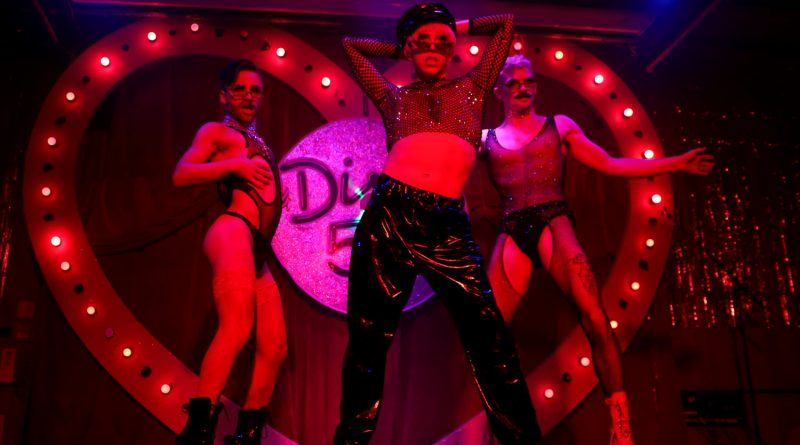 In an interview with drag star Margo Marshall, we explore the ways BGWMC maintains its working class routes whilst embracing a queer future.

It’s otherwise just another grim grey Tuesday morning, but I’m about to speak to the queen Margo Marshall, and needless to say I’m starstruck.

They owe their own rapidly burgeoning notoriety to BGWMC, and attribute their greatest professional gigs to date, like touring with pop queen Mel C and singer songwriter Ava Max, to the opportunities it has afforded them.

I chat to Margo on Zoom, where they’re sitting in their kitchen fresh faced in a plain T and immaculate electric blue nail polish. They are considered, mesmerizingly smart and their gravelly laugh is so generous, you want to lean forward and slap your thigh in joyful contagion.

But crucially, they are – in equal measure – both sincere and elated when describing the ways in which BGWMC has become one of the most pioneering inclusive queer spaces in the UK.

They also say it has more synchronicity with its male working class roots than what first meets the eye.

Working mens clubs were radical spaces in their own right, spearheading a working model of collective ownership and self-management. Yet they have all but dwindled over the last few decades, thanks to changing demographics, the 2007 smoking ban and higher taxation on alcohol.

However, unlike many other venues, BGWMC – founded in 1887 – is still owned and used by its members. From christenings to funerals –  cradle to grave – the club is still a steadfast epicentre for its East End patrons.

However, the venue has had to subsidise this income with the patronage of an entirely new audience, earning itself a new spangly bejewelled face lift – figuratively speaking, that is.

Warren Dent and Charlotte West-Williams officially got a licence to run nights at the venue in 2006, showcasing an increasingly greater variety of entertainment (although they had been doing so for a few years by that point).

Warren had to give a hard pitch to the board of die hard East End members. He recalls, amongst the smoke of their cigarettes, their cheers, ‘Go on, give him a go! What have we got to lose!’

The patrons took some time to acclimatise to the ‘cultural swap’ but have come to recognise that despite outward appearance, they were all ultimately the same.

Anyway, by that point, it was a matter of sink or swim for the club.

Dent and West-Williams didn’t intend it to necessarily be a queer venue. But they believe in new talent, whoever that may be, and once Sink the Pink performed with roaring success it was clear that the appetite was there.

Now the club is packed out non-stop, from Tuesday Cabaret evenings (not a famously easy Tuesday night gig to fill), to Pussy Palace – a night that celebrates AFAB (assigned female at birth) performers, and sexquisite events platforming sex workers.

It caters to the unsanitized, often unpalatable but always uninhibited and fantastical pleasure seekers.

And this is unique against the landscape of venues that plays to cisgendered heteronormative audiences more often that not, capitalising on one-dimensional drag depicting your ‘cookie cutter, cut crease pads, tits, wig’ ideals of femininity, as popularised by the likes of the hugely popular show RuPaul’s Drag Race.

Margo explains that although grateful for the ways it has boosted their economy, they are concerned about the ‘monopoly’ the show is growing on the scene.

‘Drag queens are now top of the pile because RuPaul decided they are and that’s not fair. Drag kings have been around for just as long as queens, and make the same commentary on gender but on the other side of the fence.

I have the privilege of being thin, white and a dancer – which is all very palatable stuff. But when I do something more non-binary, like not wearing boobs or tucking as much – people start to comment.’

As a booker of their own Drag Brunch, Margo takes the responsibility of platforming diversity seriously.

‘We all need to make more of a stand. I want to make sure there are AFAB performers, burlesque performers, drag-kings, club kids and androgenous acts’

And that’s exactly what Warren and Charlotte are doing too.

They have managed to evolve the space from a ‘nightlife’ to ‘a real hub in the community’, rhapsodises Margo.

‘They do everything to support the artists who put their shows on, and to keep us safe. As a queer person, that’s really important. Especially doing such a high octane job. You’re always running to a new venue in crap knows where with a full face of drag on – it can be stressful.’

Margo recalls countless moments that they have gone above and beyond for them.

‘I remember when I was auditioning for Drag Race and needed a place to practice my lip sync. They opened early and didn’t charge – no questions asked.

It was also the first venue that trusted me to host a night. They really take a gamble on people that they can see putting the effort back into the space.’

It all began on a Disco 54 evening – one of the club’s ‘colour cosmic’ house nights.

‘Disco is my absolute vibe. I was there having the best time and just snatched the mic and turned the place into a soul train! Then I was like, ‘everybody grab your drunk white straight friend and drag ‘em down the train! And it completely changed things up. I think they were pretty taken aback!’

They ended up hosting the next Disco 54 event a while later outside in the playground behind the venue, due to Covid.

‘It was completely joyous. The second I walked out it was like everyone was on side. It was the first time we had all been back together again after a hideous, long lockdown.

It just felt like such a relief – a truly magical day, bursting into the Bethnal Green sunshine. I’ll never forget it. I now host the night pretty regularly.’

The irony that this is all taking place in a working men’s club is not lost on Margo. But they share a delicious revelry in it too.

‘There’s such a campery in masculinity. The juxtaposition of largely old white men and us, in our crazy sparkly outfits hanging up a crapload of tinsel curtains adds to the charm of the place – it’s wonderfully ridiculous.’

‘Look at Dalston, or Shoreditch. The queer community moved into these traditionally working class areas, and in doing so helped regenerate and yes, gentrify them too. But we all get ousted in time. It’s a double edged sword.

Ultimately we all know what it’s like not to have a lot of money. We’ve had to find the resources in ourselves and support one another to make it work. We can see the campery and joy in that care.’

Margo sets the scene of a typical night performing. ‘The lights might go down, so halfway through an act someone’s running upstairs to attach the light onto something else, or wrapping it up with tape DIY style, whilst shouting ‘don’t go near the really hot light!’, but it’s the only one that’s there.

We’re always just muddling through to make it work. And I think that’s what makes it even more magical.’

It is an unlikely vanguard of how it’s possible to sustain working class institutions, whilst nurturing emerging generations in their different incarnations.

Drag performance set Margo’s professional and personal life free, allowing them to no longer ‘feel bad for loving Madonna and wanted to dance like a showgirl, even if you have a penis.’

And BGWMC’s evolution into the queer space it is today does just that for its audience members.

Whether you’re dipping your toe into its splendours for one night only or are one the fastidious Tuesday night cabaret go-ers, BGWMC is our community’s most beloved portal to euphoria.

See BGWMC’s agenda for upcoming events, including the next Disco 54 night, and join Margo Marshall presenting a night of their original music on the 3rd March at The Glory.

If you enjoyed this article, you may want to read our interview with the family behind the East End’s favourite cafe – E Pellicci.