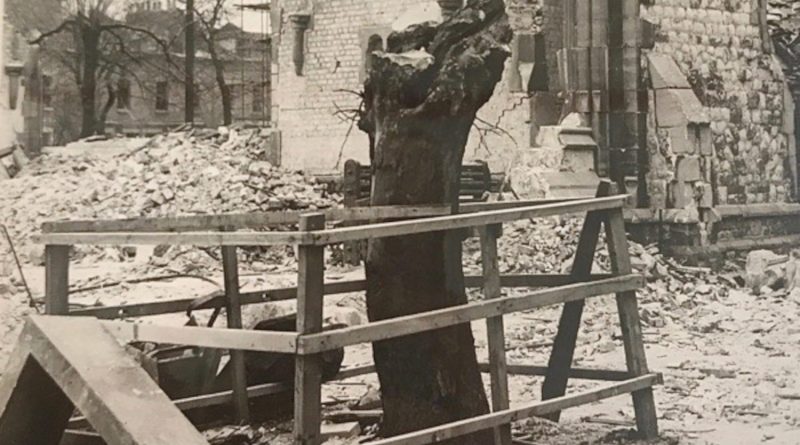 It is nothing short of miraculous that Mulberry trees have survived in the UK given they don’t self-seed and are non-native to the country.

It is maybe the tenacity of the tree and the refugees who used mulberries to weave themselves into the community 200 hundred years ago, that one of the last remaining Mulberry trees in East London – here in Bethnal Green – has been the subject of a long campaign to save it from the demolition tools of property developers.

In May 2021, following a four year campaign, the High Court retracted planning permission to redevelop the London Chest Hospital into flats, and in doing so, saved the East End’s oldest tree from its relocation and likely, eventual demise.

The decision is a testament to how the Mulberry tree has become a symbol of a broader fight to preserve the community’s heritage, as well as its environment. Most of the trees have now disappeared, but look closely and we can still see evidence of how the tree and its associated industry have defined our neighbourhood of Bethnal Green.

Mulberry trees were first brought to Britain by the Romans for their believed medicinal value. This particular tree in the London Chest Hosptial, however, was likely planted as part of James I’s vision for the nation to produce raw silk: silkworms feed on an exclusive mulberry tree diet.

In the mid-16th century, the tree grew in the grand grounds of Bishop Hall, palace and home to Bishop ‘Bloody’ Bonner, who was instrumental in the persecution of Protestants under Mary I of England.

Although the production of silk was relatively unsuccessful, the country’s silk industry was revived in the eighteenth century when the raw material was imported from elsewhere. Thus began the heyday of silk weavers populating Bethnal Green and Spitalfields, forming the heart of the city’s industrial landscape.

In a deft and ironic swerve in history, French Huguenots (Protestants) sought refuge in London, fleeing religious persecution in their tens of thousands and became the industry’s labourers. The term ‘refugee’, stemming from the French word ‘réfugié, ‘one who seeks sanctuary’ was subsequently born.

In 1855, Victorian philanthropists turned the site into the London Chest Hospital, which became the tree’s next guardian. The hospital was bombed (and it’s chapel completely decimated) in World War II, but the tree withstood the blaze, aside from a few telling scars.

Most recently, following the hospital’s closure in 2015, the tree faced renewed threat, due to plans to relocate it (along with 37 other trees) to pave way for the development of 291 flats – only 35 of which would have been affordable. However, after a long hard won fight waged by the East End Preservation Society, the veteran tree was saved once again.

So, as Bethnal Green inhabitants come and go, the tree still reliably fruits year after year, having withstood fire and war. It has quietly borne witness to the environment’s many evolutions, from aristocracy and silk labourers alike.

Follow this trail of the landmarks that together inform the trees mighty 400 years of life, to trace a more encompassing history of Bethnal Green.

If you enjoyed this photo trail, you might enjoy this piece about what we can learn from Brick Lane’s Mosque and Sundial.