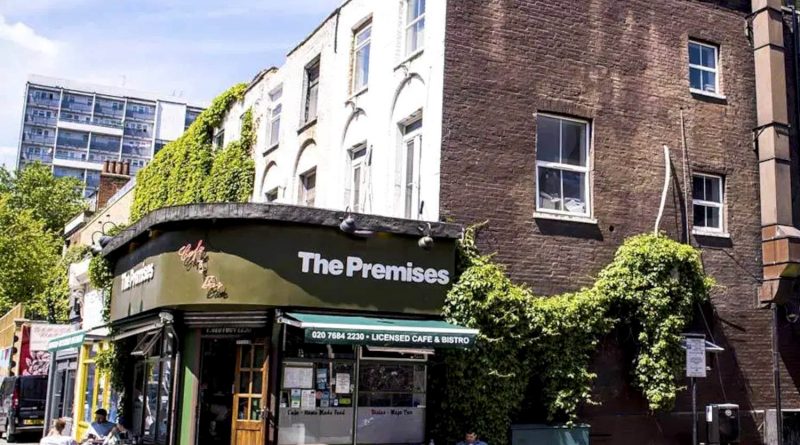 The Premises Cafe on Hackney Road has become a firm favourite amongst both artists and locals alike.

There is something about the Premises Cafe that makes you feel at home as soon as you set foot in the door. It has a surprisingly unpretentious atmosphere considering how great artists, such as Patti Smith and the Arctic Monkeys have graced the building. I can picture them sitting on the red cushioned chairs tucking into a Meze platter or devouring a Spanish omelette in between recording sessions.

It is this belief in unpretentiousness in which The Premises Studios is founded upon; local jazz musicians Dill Katz and Colin Dudman opened the studios in 1986 as a cost-effective alternative to London’s established recording studios. Since then, it has been the birthplace for hit songs from some of the world’s best musicians and artists.

Attached to the studios on the corner of Hackney Road and Dawson Street is Premises Cafe. It has thick green vines growing up the wall, little wicker chairs and green tiled tables perched upon the pavement. I sit down inside at a little table in the corner that looks out onto the road.

The windows are adorned with fake plants and strings of tiny lights. Perched up on the windowsill are more little plastic plants sat in cups of water. In front of the windows on the pavements, you can sit outside and watch the world go by.

The most popular lunch choices, I’m told by the no-nonsense yet cheery waitress, are the burritos. This is confirmed by the poster of singer-songwriter Izzy Bizu, in which, above her signature, she thanks the Premises Cafe for her delicious burrito.

Although it is mostly a Turkish cafe, the menu has a diverse selection of British classics such as jacket potatoes; toppings of a combination of cheese, beans and tuna, omelettes and full English breakfasts. A regular customer sat next to me ordered a ‘number one’ (bacon, sausage, egg, hash browns, beans) without even needing to look at the menu. I even spot a 12 ounce steak on the specials board for £19.95.

Another favourite amongst customers apparently is the chicken korma, advertised on the special lunch menu hanging above the dark green tiled bar. Electronic music composer Simon Greene, AKA Bonobo, greatly enjoyed the Meze, as his signed action shot on the wall tells customers.

After deliberating between the Vegetarian breakfast, which included a veggie sausage, hash browns and bubble and squeak and the mixed veggie baguette, I settled for the latter. I was keen to try one of the ingredients in it: kisir.

Kisir is a type of bulgar wheat salad made with tomato paste, parsley and biber salçası, which is a kind of pepper paste. It’s sometimes referred to as Turkish tabbouleh and is more frequently served as part of Meze platters rather than in a sandwich, but it worked well all the same.

The baguette was toasted but not too crunchy as to feel like your teeth are about to break. Inside, there were juicy, soft pieces of aubergine, tucked in between thick slabs of salty halloumi. As well as salad on the side of my plate, it was also stuffed into the baguette alongside the kisir. The gentle tomato flavour of the kisir reminded me of my grandmother’s cooking; warming for the soul and satisfying for the stomach.

The salad was made up of two types of tomatoes and an abundance of mixed leaves so I left the cafe not feeling too bogged down by carbs. It’s perfect for people that like the sharp taste of red onion and tart vinaigrette.

To alleviate the effects of the mid-day slump, I ordered a black coffee, which arrived in a cappuccino cup filled to the brim. It had a slightly tangy taste, but managed to soothe my mood and simultaneously perk me up.

What makes the Premises Cafe unique are the layers of character to the place: it has some aspects of a typical east London caff, whilst also having an obvious Mediterranean theme, serving up delicious Turkish cuisine, yet, as its open to 11pm and is fully licensed, it also has all the makings of a more formal restaurant, as they serve a wide selection of wines, spirits and beers.

As you munch upon the eclectic range of dishes, surrounded by signed pictures of famous celebrities, with one of the best recording studios in the country sitting next door, it’s easy to see why the Guardian included the the cafe on their list of 50 coolest places to eat in the world.

Premises Cafe and Bistro can be relied upon to provide great service and a menu brimming with various Turkish and British choices. It’s perfect for a Sunday morning with the family, or a weekday lunch catching up with an old friend.

If you enjoyed this review, you may enjoy our review of La Forchetta.