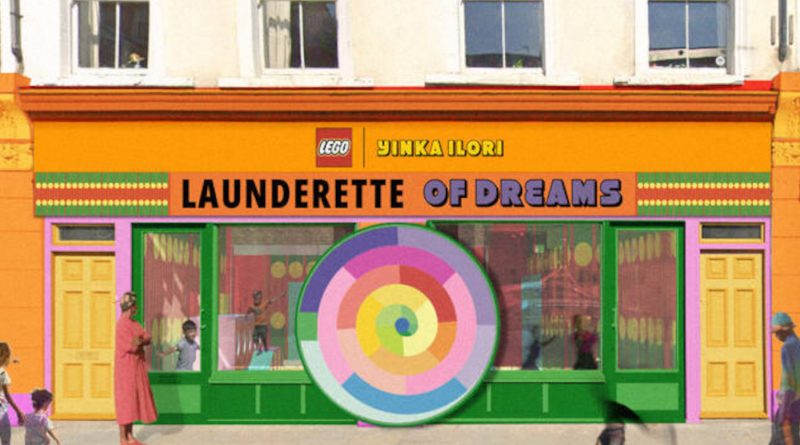 The Laundrette of Dreams installation, brightening up the dreariest of days.
Local Places to visit Things to do and places to visit
October 25, 2021November 15, 2021 Lily Wakeley 78 Views 0 Comments News 1 min read

The artist Yinka Ilori has reimagined the utilitarian laundrette as a play space of dreams, to inspire creativity even amidst the most mundane of places on Bethnal Green Road.

With the help of LEGO® bricks, Yinka Ilori has designed a laundrette as a colourful children’s playspace at 133-135 Bethnal Green Road. Visit the free public installation from 28th October to November 6th and join workshops hosted by Yinka himself, who will draw on childhood memories of making chores more fun through play, and reflecting on how art can be a part of this.

LEGO will also be running workshops to encourage children to make even the most boring of places an adventure wonderland using their age-old toy bricks.

With the help of children from the schools he went to in Dalston, Yinka was inspired by the laundrette he went to as a kid on Essex Road. Yinka is known to channel his Nigerian heritage into his artwork, bringing an explosion of colour and joyfulness wherever he goes.

He believes that public spaces can be made more inclusive through better design. His recent work has included the building of technicolour basketball courts, jazzing up zebra crossings all over London, revamping playgrounds and making a public seating space in Tottenham with a clock that reads ‘Take it in and and take time’.

Yinka’s thoughtful and vibrant style has landed him the exhibition of two installations at the London Design Festival and being lauded the creative director of The Brit Awards, this year alone.

If you need your dirty socks cleaned however, you’ll need to go elsewhere. You might want to consider a trip to the not-for-profit social enterprise Boundary Community Laundrette in Shoreditch. The laundrette is at heart of the Boundary Estate – London’s first council housing project – doubling up as the community hub whilst ensuring the Shoredith football team’s kit stays spick and span.

For a short period of time only, Yinka is realising the dreams of film fanatics in bringing the film classic My Beautiful Laundrette to life here in the East End. But this time, it’s a little less punk and a bit more colour factory of fantasy.