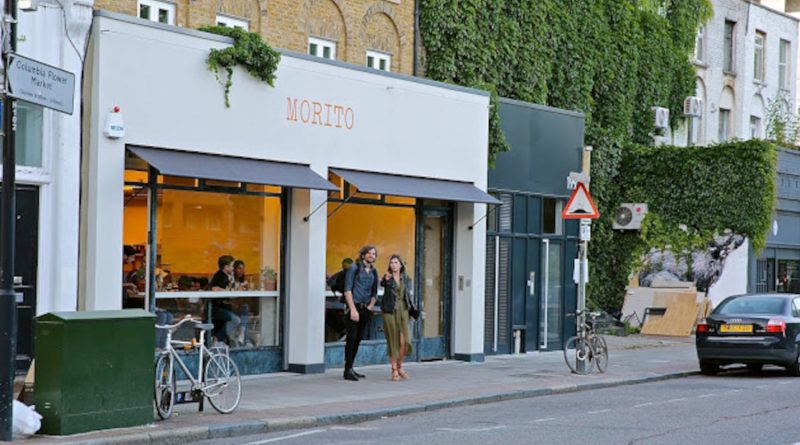 Local resident and writer, Lily Wakeley takes a stroll down Hackney Road to take in its medley of offerings: restaurants, craftsmanship, a farm, quirks and all.

In less than five minutes I had encountered a man with a tabby cat candidly slung over his shoulder as he waltzed over the rainbow zebra crossing; someone speeding past on a bike at least a mind-boggling 2 metres tall; and a friend, off to hand in her CV at the famously romantic wine bar, Sager + Wilde (whose ‘nudja toastie, by the way, is outrageously good).

As I wish her luck, I wander down Hackney Road –  the arterial cusp between Tower Hamlets and Hackney – which never fails to put a spring in my step with its brilliance of variety. Everything seems heightened on this mild autumnal, sunny day.

The walk from Cambridge Heath overground station to Shoreditch Church will defy easy categorisation. Its people, its architecture, its shops and restaurants are made up of a shifting, miscellaneous demographic, and assortment of styles that reflect this.

The road has a higher than average white (and relatively wealthy) population, unsurprisingly so considering it is sandwiched between Columbia Road and Broadway Market –  two of the East End’s wealthiest pockets, boasting an overrepresentation of kombucha lovers, house plants collectors and artfully misshapen, dearly priced ceramic makers. There are also Bangladeshi, as well as Chinese and Vietnamese populations here too.

The sound of the train I hop off at Cambridge Heath just about subsumes the hammering from the mechanic workshops, stationed in the adjacent arches of Clare Street, as I start the journey emerging from under its bridge.

This end of the street has more Victorian builds, with flatter fronts and higher reach. But the architecture changes as frequently as the traffic lights.

The street regresses in time as it snakes towards Shoreditch, with Georgian terraced houses that stand in blocks of about four or so houses at a time. But just as you start to notice a pattern, time jumps between the centuries.

It feels distinctively different to the parallel Bethnal Green Road, where all the shop fronts are flat, as though taking in a deep breath, making space for the markets that spill onto the road.

This end has lots of wholesale shops – shoes, bags and vast spillages of Docklands second-hand office furniture onto the pavement – which seem to forever exist in flash bargain sales; fruit and veg stores that are currently steeped in lumpy gourds and yesterday’s news pumpkins; and the Shisha Garden Grill, steaming with the smoke of hookah and charring kebabs.

Soon there is subtle transformation, as barber shops are replaced with tattooists, and bargain stores are traded in with the sale of custom neon art. One art shop is exhibiting ‘An Accidentally Wes Anderson’ photography, stirring a desire to go and watch the new French Dispatch.

The hotel Mama Shelter is another telltale sign of this shift, whose name I often think might be mistaken for a cat rescue, if it wasn’t for the demure black paint and luxurious garden furniture out front.

And of course, the street is immediately pickled with quintessential East End boozers – some more gourmet, and others creaking with age but still heavy in charm. My favourite (along with most locals) is the Sebright Arms, which you will find soon after the hotel, led by fairy lights down an inconspicuous alley through to Coate Street.

You’ll be met by the smokers standing outside of the cosy, wood-panelled venue. You’ll hear the murmurs of those inside, sitting in pools of soft stained glass tinted light, and the hum of live music from the basement.

I catch furtive, longing glances at the houses on the right on the road, in all their chocolate box Georgian perfectness. Their front gardens are beset with an abundance of greenery, with signs of the summer gone, boxed in by neat iron fences.

These green fringes add to the street’s feeling of spaciousness, which it already possesses from the wideness of the road, absorbing the business of its eclectic crowds. But just before I enjoy a full gulp of green air, tinted with the scent of hydrangeas and fig trees, I’m reminded of New York as the buildings suddenly loom higher in the sky, their exterior fire escapes running from top to bottom.

Another break from the cityscape is Hackney City Farm. It suddenly appears after a halt in the road just after the Victorian built Queen Elizabeth Hospital for Children (recently redeveloped into flats, joining the ranks of controversial development on this road’s hot real estate). The brightly painted wooden signage is the first telltale sign of the city farm, overrun by thick trees, hinting at the respite it offers within.

Opposite I hungrily spy the legendary pasteis de nata gleaming in the window of A Portuguese Love Affair, a cafe that sells take-away and sit-in delights, as well as ceramics, soaps and colourful tins of sardines.

I walk away with a bottle of white port tucked under my arm, which I will obediently enjoy with tonic and a slice of orange as instructed by the shop owner, certifiably cool with her short fringe and visibly tattooed arms.

But don’t linger too long because you’ll undoubtedly stop to steam up the glass as you look into the restaurant Morito, whose tapas menu is influenced by North Africa, Spain and Middle Eastern cuisine. Waiters dart between marbled top counters and effortlessly dressed couples on dates, coyly leaning back in their chairs. I salivate as I recall the deep fried aubergines I ate there not too long ago, smothered in whipped feta and sweetened by date molasses.

The Georgian builds, characteristically two storeys, often have one storey front protrusions, where gardens used to be. These cubbies are perfect snugs for independent and pop-up shops, cafes and services that range from that of promised beauty to the carpentry of bespoke furniture. They are suddenly white with pointed roofs and small round windows, bringing a nautical charm to this otherwise urban terrain.

Slum clearances and bomb damage from World War Two made way for the build of more modern social housing, like that of Dorset Estate.

You might also giggle to yourself as I did, at the contrast between a derelict shop with the delivery service ‘Gorillas’ blaringly advertised on the frosted glass next to the The Olde Axe, just before the intersection with Columbia Road. It’s beautiful but dilapidated olive coloured Jacobean facade is home to a listed strip pub, whose license has been recently renewed, despite complaints from local residents.

Finally, just as the road ends before it forks off into Shoreditch, you will be met by the mecca of Asian – largely Vietnamese – supermarkets, the Longdon outlet. This is my happy place. I could wander around, marvelling for hours.

Whole durians and slabs of pickled radish; freezers filled with glutinous mochi, ice creams and cakes, stuffed with sweet red bean pastes and fruits from the Southern Hemisphere; intricate packets of wrappers or ‘skins’ for wontons, gyozas, spring rolls and dumplings, all translucent under the fluorescent freezer lights; squidgy brioche steamed buns, stuffed with pork and kimchi; and a host of dips, sauces, oils pastes I can only dream to know how best to use; vacuum packed melon seeds, dehydrated mushrooms and lily bulbs; and meats, just a bit too daring for me, a newly ex-vegetarian – fat langoustines, duck tongues, chicken feet and pig trotters.

I leave the store with a pork bun, soup ladles and a variety of chilli oils, happily thinking about the port I will later enjoy after my big day out on Hackney Road, recalling the many wonders I luckily have, right here on my own doorstep.

If you enjoyed this, you may enjoy our picture trail of Bethnal Green’s Mulberry Tree.