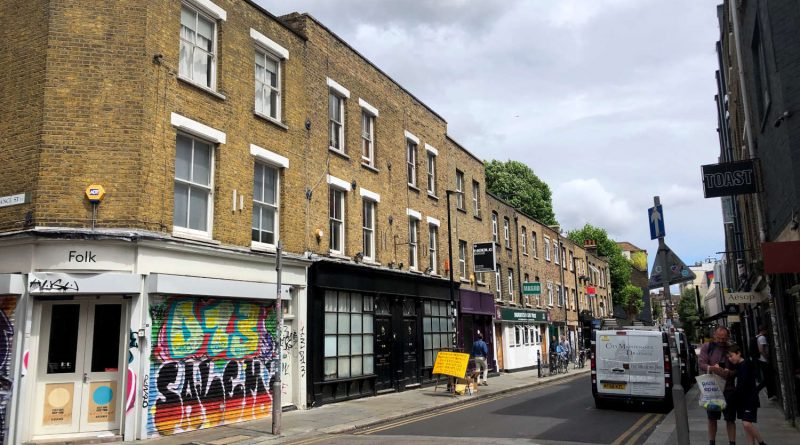 Writer Niamh O’Neill searches for the most costly coffee on the swanky Redchurch Street in Shoreditch.

“I would say their general smell has an indescribable nostalgia,” the sales assistant of Earl of East told me, after I followed my nose into the store and straight over to the curiously-named candles. I was excited to learn that you can make your own ‘Jardin de la Lune’ or ‘Viagem,’ (apparently the Portuguese word for travel) at the shop’s regular candle making workshops.

But I was not there to sniff candles. I had come to Redchurch Street, a narrow road lined with boutiques and pavement cafes, to hunt down the most expensive oat milk flat white. A mission not all that difficult considering how Redchurch Street, tucked in between the western end of Bethnal Green Road and Arnold Circus, embodies the aggressive gentrification of Shoreditch. And, as a result, overpriced coffees and t-shirts which say, ‘Love The Earth’ run rife.

Redchurch Street is like Noah’s ark: all businesses seem to come in pairs. But unlike the animals in the ark, they appear face to face; enemies in battle for the business of East London’s hipsters. For example: in the coffee conflict, Jolene bakery and All Press coffee occupy the middle of Redchurch, glaring at each other from either side of the street.

The next binary is the battle for best hair, between barbers Murdock and hair salon Boone and Last. In the struggle for the spotlight for post-work drinks with views over Shoreditch, lies the recently renovated Boundary Bar and the Shoreditch House rooftop bar. The list goes on: Italian restaurants: Cecconis and Burro e Salvia; skincare and candle shops, Aesop and Earl of East.

But back to the hunt for the most expensive flat white. I began at the east end of the street, at a coffee house called Gecko, just a stone’s throw away from the top of Brick Lane.

Gecko is a vegan-friendly cafe with bare wooden floors and a desert-themed decor. On one side of the cafe, customers can sit on their high stools, tapping away on their laptops, as they look out the window at Bethnal Green Road. On the opposite side of the cafe, you can sit people-watching as they march down Redchurch Street.

After ordering my coffee I waited apprehensively, hovering my card in the air. £3.50 popped up on the card machine. I tapped unenthusiastically and sat down to enjoy my oat milk flat white in its tiny speckled ceramic cup. 8/10 for taste. 5/10 for price. Free oat milk however, was definitely a plus.

I headed out of Gecko and took a left, scouting for my next coffee stop. As you wander down Redchurch Street, it’s impossible to miss the street art dotted up and down the road.

The road has been a heartland for street artists in the last couple of decades, finding their home there long before the arrival of the boutiques and members clubs. The warehouse buildings and corner shop shutters provided canvases for street artists. The area has played a significant role in helping to develop the careers of many artists, lots of whom have gone on to experience international success.

To the left of Gecko, on the wall of Rich Mix cultural arts centre, there is a street art mural depicting a young Ukrainian girl with a wistful expression, wearing a hat in the Ukrainian flag’s colours. The painting was done by London-based artist WOSKerski, as a tribute to the refugees.

A huddle of people stood in front of the painting, snapping pictures on their iPhone 13s. In the foreground of their images, in front of Rich Mix, there are large wooden boxes, filled with unruly flowers the colour of Parma violets and custard.  Behind them is the Labour and Wait, a hardware store adorned in forest green tiles, which, along with the hand painted sign, link the shop to the original design of The Dolphin pub: the previous occupant of the building. The Dolphin was first recorded on the site in 1807, and was supposedly the meeting place for local Huguenot populations. It was converted to a residential building in 2002, and became Labour and Wait’s flagship in 2010.

What’s interesting is amongst all of these hipster hangouts and bright street art, is Shoreditch Masjid Trust; an unassuming mosque and Islamic cultural education centre which starkly contrasts the surrounding run of boutiques and an odd plant shop called Sowvital; a neon sign buzzing inside.

The boutique plant shop brands itself as ‘eco-friendly urban plant care’; it’s a place where millennials go to buy products such as ‘Aqua Leaf Cleanser’ to revive their money plants that function as substitute children.

Next stop on the oat milk flat white quest was Jolene. Located on the corner of Club Row and Redchurch, it is a tiny takeaway cafe with painted coral walls. As I approached the shop, a tall barista wearing big gold hoops and an oversized chequered blazer slid the window up, shouting loudly at people to collect their orders.

I stepped inside and deliberated buying one of their brie, tomato and watercress sandwiches but reminded myself of my sole purpose today. Pricey Oat Milk Flat Whites. The moment came, I peered over the card machine. A solid £3.00. Not bad. However what did slightly concern me was the sign next to plain croissants: £4.00. Ouch.

Opposite Jolene I strolled past a sprawl of young people lounging on the chairs outside the Venetian restaurant Cecconi’s, owned by Soho House. The evening sun slowly retreated up the brick walls. Soft melancholic jazz could be heard echoing from inside the building.

The commercial art piece depicts a huge orange tree, plastered across the side of the building, with a QR code at the bottom, which of course, I have to scan. It takes me to a site called ‘Treedom’ which advertises a long-term tree planting initiative which ‘benefits the planet in many different ways’.

This feels a little ironic, considering how, below the mural, there is a Zapp warehouse. Zapp is a grocery delivery company which came to fruition during lockdown, fulfilling our hyper-consumerist needs at lightning fast speeds. A somewhat contradiction to the sustainable Treedom initiatives advertised through the painting’s QR code, which celebrates World Environment Day.

At the end of Redchurch street the Tea Building stands tall, with office workers hanging outside, smoking their cigarettes and discussing marketing strategies. The Tea Building was originally built in the early 1930s for the Lipton brand on the site of a bacon factory. It was then used to pack tea until the investment company Derwent London transformed it into the hub of businesses which occupy it today.

With a broken bank, a jittery heart and a slight headache, I walked back down the street towards the west end where I’d parked my bike, arriving at my final destination. Franzè and Evans is a dark Brooklyn-style cafe which I heard had the most expensive coffee in the area.

However, I was pleasantly surprised to see a flat white advertised for £2.80 on the board, but alas, a painful 50p charge for oat milk, bringing it to a grand total of £3.30. Star Trek actor James Cromwell has shared my outrage at these unfair extra charges; just last week he glued himself to a Starbucks counter in New York, to protest the unfairness of the corporation’s surcharges on vegan milk.

So the hunt for Redchurch Street’s most expensive flat white was complete. These coffees were on average 60p more expensive than a Starbucks flat white, but it was worth it to be able to experience everything Redchurch Street has to offer: from mouth blown stained glass ashtrays at Earl of East to the honeyed scent of houseplant elixirs emanating from Sowvital, it is a profound experience for the senses.

If you liked this, you may also enjoy reading about the best pubs in Bethnal Green.