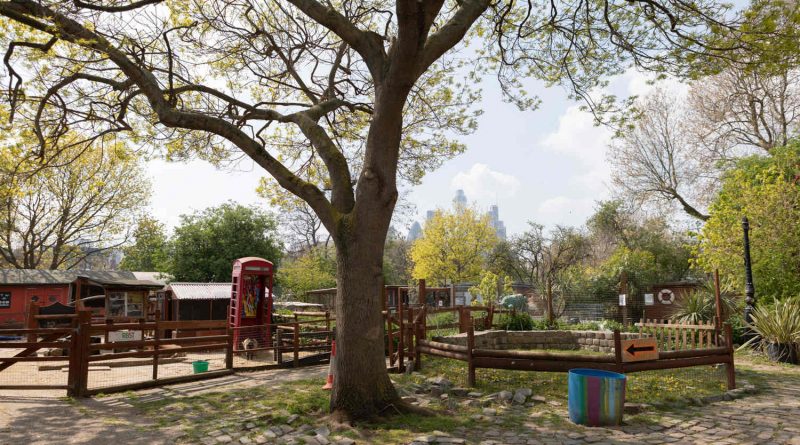 You might feel as dubious as we did about the possibility of stumbling across a farm as you push through the throng of Brick Lane. But sure enough, here is Spitalfield City Farm in total tranquility, dewy and quiet with the new morning, spare the comforting cluck of hens and the bleat of goats.

Spitalfields City Farm was founded in 1978 when local residents’ demanded access to allotment space after losing theirs to developers. Now, the farm boasts a sizeable community vegetable patch, 65 animals (excluding the bees), a farm shop and cafe, event space and plenty more.

Although it’s evident that animals rule the roost here, the farm has become a lynchpin in the wider Bethnal Green community – and it’s no wonder. There is something here for everyone, and all participation is one step closer to more ethical, environmentally conscious and healthy living.

With the increasing urgency of the global climate crisis, there’s a lot to be said for looking local for examples of how to treat ourselves and our world better.

Emma, our farm guide, recalls a time when the goats contracted mange (a skin disease) from their associates, the urbanite fox. To cure the goats, the foxes had to be treated first to prevent recontamination.

The farm is an important life lesson in our coexistence in one shared and integrated ecosystem, whether we like it or not.

The Garden and Veggies

The farm is radiant with colour, despite the overcast day.  There are beds of colourful wild flowers; the floor is awash with auburn leaves from a handsome ash tree; a mulberry tree still clinging on to its greenery; and plums and golden gourds, ripe for Halloween.

The garden is made up of a grass bed with three raised banks, meadow grasses, a miniature wildlife garden and an impressive plant nursery and vegetable patch. It is overrun with herbs and flowers, ranging from primrose, wild garlic, forget me nots to wild strawberries. And amongst them, little beasts like butterflies and newts have made a happy home.

Apart from a few sections that are designated to groups (like one that supports adults with learning disabilities), the veggie garden isn’t owned by anyone. The volume of produce packs a serious punch, feeding the hungry mouths in the farm cafe, in community suppers and in group cooking sessions.

Surplus produce is now also being sold in the farm shop and through the wonderful Nourished Communities, mainly via their store in Islington but you can also get it delivered to your door in Bethnal Green.

The farm is non-slaughter, and is committed to the conservation of rare breed animals. This includes the likes of the one eared herdwick sheep, Beatrix whose native to the Lake District (her namesake Beatrix Potter was very significant to their conservation).

You’ll likely first meet some of the smaller farm ‘residents’. Peanut the ferret, snuggled down in a blanket, resting after a recent diabetes diagnosis. Lily the guinea pig is adorable, despite resembling more of a boxer dog than a cuddly rodent.

Then there’s Demeter the goat, aptly named after the Goddess of agriculture. Last year was a sad break in the annual Cambridge v. Oxford Goat Race, which is a fun (and more inclusive) take on the university boat race. The winning goat wins a trophy sculpted from a vegetable made by attendee children, and the occasional drunk hipster…

It is the only time the farm charges for entry. It’s an important income for the farm which is otherwise largely funded by charitable grants.

Emma talks passionately about the urgent need for better government funding for farms like theirs, particularly because of the exponential benefits to mental health and learning.

One little boy’s school commented on the marked improvement in his ability to engage at school after attending some of the farm’s summer activities. Other kids who struggle to concentrate come alive when interacting with the animals or getting stuck in with planting and building.

We’re told that many fully grown men have had to schooled in the fact chickens, shockingly, don’t need roosters to produce eggs (Emma helpfully uses the analogy of women getting monthly periods, regardless of men).

Whilst some animals were well acquainted with the concept of quarantine during lockdown, others were more hit by the sudden isolation.

Holmes, the gorgeous kunekune pig (a Māori word meaning ‘fat and round’) plunged into a state of depression when suffering a double loss of visitors as well as his brother, who died at this time.

Comparatively, the sheep are no strangers to stints of solitude following their trips to neighbouring farms to get pregnant. This ensures they haven’t picked up any nasty diseases from their romantic rendez-vous trips away.

Thankfully, Holmes has refound his mojo since being happily reacquainted with his pals (that is to say, you and me, the visitors). He can be seen happily chatting away, whilst rummaging for the last of the season’s crab apples.

Events and getting involved

Whether you’re looking to rent the entire space, a yurt or a tent, the farm is an idyllic place to rent for weddings, birthday parties or workshops.

Children don’t even realise they are learning at animal petting birthday parties held at the farm. But they leave with more information in their arsenal to help make informed decisions about how they will later choose to engage in the world and its food systems.

When not at the farm, the animals have even toured around the country to mobile farm events.

The organisation is massively benefitted by its generous volunteers, who put their hands and green fingers to animal care and the garden. It even enjoys visits from corporate business men on CSR trips, who unbridle any pent up machismo in the glamorous task of mucking out the animals.

The farm is an inspiring example of the power of good old fashioned hands on community building, and the  delight of being in nature. It gives us a sense of excitement for the increasing build of Care Farms, which are being used as restorative alternatives to state institutions for the likes of youth offenders, dementia patients and trauma survivors.

The future certainly looks bright if Spitalfields City Farm is anything to go by.

You can enjoy the documentation of the farm’s changing seasons in a calendar, accompanied by the words of The Gentle Author and Rachel Ferriman’s photographs.