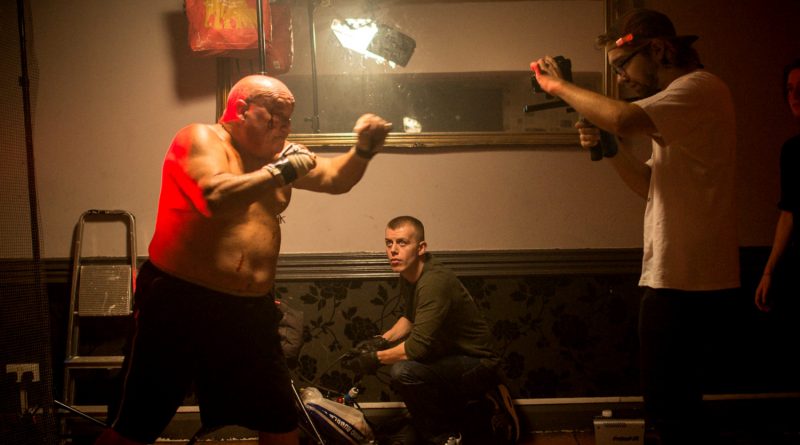 East Ender Billy Taylor’s illustrious career spanned that from Olympic boxing champ, a member of the Territorial Army, to starring in Harry Potter as a member of the Ugly acting agency.

Billy Taylor was a born entertainer and natural extrovert, feeling most at ease in front of the camera or under the lights in a boxing ring. His life of adrenalin and living life to the absolute fullest eventually caught up with him when he died 19th January 2022 at the age of 68, due to kidney and eventual organ failure. He leaves his wife Elaine and daughter Natasha behind him.

Born on the 14th September 1952, Billy grew up in Haggerston with his dad Toshy, mum, older sister and brother Brian. His childhood was that of a ‘typical East End boy’, packed with adventure and physical activity, Mark Newman from Repton boxing club tells me.

Mark was a few years Billy’s junior, meeting him around the age of 11 at Repton Boxing Club. Toshy started his sons Billy and Brian out in their local clubs in Hoxton. But he moved them onto Repton Boxing Club to join the ranks of international stars, when it was apparent Billy had a natural talent and appetite for the sport.

Billy attended Daneford School for boys near Columbia Road, where the boxer Johnny Stracey also went. Mark would cycle over to Clissold Park to play with Brian, who was more his contemporary, where they’d join Billy’s father Toshy – the park keeper – for a cup of tea and a chat. He looked up to Billy as the older kid, and recalls that from a young age he was naturally out-going, sociable with a  brilliant sense of humour.

A childhood of outdoorsiness and physical activity inspired Billy to join the territorial army in his teenage years. Mark explains that lots of people they knew toyed with the idea, but most had the good sense not to go through with it. Billy however was a proud participant, and was an honorary member of the Royal Green Jackets right until the end of his life.

Billy and the other boys spent most evenings training and sparring at Repton, spending so much time together it was as if ‘they became brothers’, Mark says. Billy’s skill and dedication set a high precedent for his peers.

He was like a ‘little bulldog! Always moving forward on the attack – what we call a box fighter’. Mark jokes that he never fought Billy, ‘he was far too powerful for me!’

His strength and technique won him a national title as a junior, representing Repton. He continued to excel through his senior boxing career, winning more national titles for the club and the nickname ‘Billy the Kid’.

Mark vividly remembers watching him fight Jimmy Flint, ‘the Wapping Assassin’ in the final of the North East Division of the ABA’s when they were about nineteen years old. It was an especially ‘ferocious and exciting match’, which contrary to the declared outcome Jimmy still insists he in fact won to this day!

In 1972 Billy fought at the men’s featherweight event at the Munich Olympics, defeating Lachen Magfour of Morocco before eventually losing to Jochen Backfield of East Germany. It was at this point he turned professional, going on to win all five professional fights and gaining six belts.

He turned his hand to acting, finding new avenues to chase the adrenalin highs and adulation that boxing offers. His striking look meant he did quite well with the ‘Ugly’ agency, often being cast in roles of the villain.

Highlights included starring in an advert for the drink Tango, where he played ‘a big fat orange and comical character!’. In his later years, he was cast  as a strong man in Fantastic Beasts: The Crimes of Grindelwald, JK Rowling’s Harry Potter prequel saga.

He continued his staunch allegiance to Repton Club by becoming a coach, where he fostered up to 50 kids to become champions in their own right.

Dave Robinson, the Repton club chairman of the last 35 years, said he ‘had a good eye for talent, he knew what he was looking for. He saw things I never saw. Being an Olympian and being with the senior squad of boxers for years with Tony Burns and Maurice Hope, he was mixing with top boxers around the world; he could spot talent.”

He was famed for instilling dedication and discipline amongst his Juniors. His work helped maintain Repton’s reputation as one of the best clubs in the world. A particularly proud moment was when seven of his boxers won national titles in one day at a derby, earning the legendary name as the ‘magnificent seven’.

Billy was also known to like to party, drinking and eating in relative excess and constant joviality. He could be found spinning yarns at local boozers in Hoxton, like the (now demolished) Acorn and the Green Man pub.

Although not involved with the Kray twin’s lifestyles, Billy was at the Repton Club at the time that they were too. There is a photograph of Billy, Brian, Mark, the twins and their older brother Charlie giddily posing with the legendary Rocky Marciano – the heavyweight champion of the world at the time – brought together in shared fandom.

Billy later moved to Clacton where his dad Toshy had retired to, with his wife and daughter. There he set up his own boxing club with another former Repton Olympian, Graham Moughton. The club became St Osyth, where he stayed inspiring young boxers there right until his end.

He ended up caring for his wife Elaine who was bound to a wheelchair in the latter years of his life, until the tables turned and his health started to deteriorate.

Mark explains that everyone had assumed he was on the mend. He continued writing light hearted posts on Facebook and kept his chin up, right until the end.

‘It’s typical Billy that he didn’t want people to know he was on his way out’, maintaining an air of bravado and geniality. You can read Mark’s post of remembrance on the Repton Facebook page.

Billy is in many ways emblematic of Bethnal Green, in both his character and professional career.

His death is a great loss for the community, but there is no doubt his memory lives on in the Repton Boxing Club ring and the ever growing wall of fame.

You might also be interested in seeing these photos of Repton boxers training by local photographer Andrew Leo.